About the Verein Deutsch Drahthaar Pointer

The Deutsch-Drahthaar (DD) began with the idea of developing a breed from the existing individual hunting specialists that would be universal and could do all the practical hunting tasks. Among the ancestors of the Deutsch-Drahthaar belong the old Water Poodle and the English Pointer. At the end of the 18th Century, a robust, fully usable dog was created in Germany from the best of the existing coarse hair breeds, Pudelpointer, Stichelhaar, and Griffon, and bred with the Deutsch Kurzhaar. 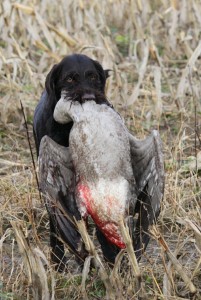 The spiritual father of the Drahthaar, Freiherr Sigismund of Zedlitz and Neukirch, also called Hegewald, demanded that the primary breeding goal of the hunting dog be versatile performance ability. His thoughts became the principle of Drahthaar breeding: “through performance to standard.”

The Hegewald breeding test is known because of him. Yearly at this international fall breeding test, the strongest performing young dogs are presented from within and outside of Germany for critical comparison and to give information about the status of the Drahthaar breed.

The Drahthaar is the most frequently used hunting dog by the hunting establishment in Germany, and that is not without reason: The versatile work range of the all-around dog demands an intelligent, mentally flexible dog. Endurance and a will to obey, as well as the ability to concentrate on work, characterize this robust fellow in the coarse jacket. When others quit, work is just beginning for him. As a dog that can be used universally for a full range of tasks and as a dog for the work after the shot, the Drahthaar is unsurpassed. He brings to the hunt many specialties. 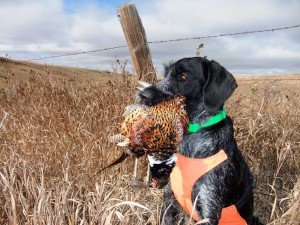 The Drahthaar is a passionate hunting dog with industry and endurance, calm by nature, friendly in relations. As with every genuine working dog, however, he needs legitimate specialty training and guidance. Only when given sufficient activity does he feel content.

Today, it is also important that the Drahthaar be a pleasant companion for other aspects of life. He is friendly and self-aware with regard to people and other breeds. The Drahthaar is gentle with children and a suitable family dog. He is no problem to keep in the kennel or the house.

Persistently and methodically the Drahthaar searches the field with a sensitive nose. He shows the game he finds by pointing. In the forest and water he performs exemplary hunting tasks. In particular he exhibits the characteristics of a retriever of lost game. He does this by his ability to pursue wounded game persistently and uncompromisingly and to follow under the most difficult conditions in order to save the game from unnecessary suffering. Just by choosing the Deutsch-Drahthaar breed, the work after the shot is capably assigned. His obedience and concentration abilities make him particularly suited for hard work. Consequently the Drahthaar is not only a pointer but a truly many faceted dog.

By every type of hunt, and in all weather conditions, he is a true companion. Conforming to animal protection and skill hunting requirements is possible to and exceptional degree with this all-around dog. 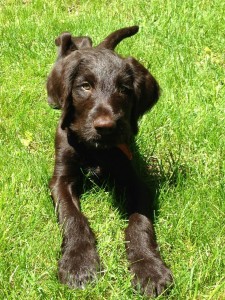 Hunting dogs need a healthy, performance capable body and a reliable nature to fulfill their purpose. The Drahthaar is a mid-sized, dog with robust health.

The shoulder height varies for the male from around 61 to 68 cm, for the female from around 57 to 64 cm. The wiry, tightly fit hair, with thick under wool, offers optimal protection from external influences such as moisture, heat and cold, as well as thorns and sharp cornered reeds.
The dark eyes with the extended eye brow as well as the typical beard give the Drahthaar his characteristic appearance. The Deutsch-Drahthaar has a variety of colorations: brown and gray, black and gray, and brown with and without white breast spots.

The VDD…The Deutsch-Drahthaar Organization, e.V. (registered club)
The organization was founded in May 1902. With over 10,000 members, it is the largest hunting dog breeders organization. The Verein Deutsch-Drahthaar (VDD) is a member of the Jagdgebrauchshundeverband (Hunting Dog User Association) (JGHV) and associated with the Verband fur das deutsche Hundewesen (Association for German Dog Affairs) (VDH) and the FCI. The club has 34 regional groups belonging to it in many countries, including USA and Canada.

This information copied from the pamphlet provided by the VDD-GNA (Verein Deutch-Drahthaar-Group North America). For more information about the VDD-GNA visit their website, or call their National Inquiries representatives, Neal and Rhonda Feazel at (815)734-7078.